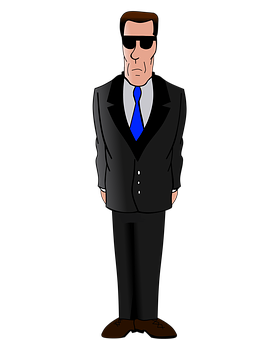 It has been suggested that this man is frowning because Donald Trump just fired him from his Secret Service job.

The Internet – Because he is totally allowed to do such a thing as President-elect, Donald Trump has fired the Secret Service agents assigned to protect him, reallocating the funds previously used for security in order to pay for wall-building and deportation programs. This has allegedly been confirmed by a source which has not revealed anything about why he or she should be believed, but we at TotesRealNews believe this source because it told us what we want to hear.

When asked why he would get rid of people whose job it is to keep him alive, Trump said he didn’t need them. He was quoted as saying “Why would anyone want to hurt me? Everyone loves me. I am the most popular person to ever be elected president, and all the people protesting are not really angry, they’re just being paid by the Democrats to make it seem like not everyone thinks I’m the greatest. But everyone thinks I’m the greatest. Even the Democrats.”

Trump continued excusing his decision by claiming Mike Pence provides better protection than any armed agent ever could. While Trump’s position supporting the torture of those suspected of terrorist activities can be unpopular, Mike Pence’s position in favor of torturing people who are attracted to the same sex until they change their preferences or die can be seen as more extreme, and could serve to discourage potential assassins. And Pence probably believes in torturing terrorists as well, but due to our firm belief in poor journalistic integrity we are unwilling to research the matter, although Pence is probably for brutality whenever the opportunity presents itself, and sometimes when there should be no reasonable opportunity, such as when he would deny health care coverage to people suffering from smoking-induced lung cancer because smoking doesn’t cause cancer so they don’t have cancer and they’re just being babies trying to bilk the insurance industry out of their hard-stolen dollars. Pence also has his own potential e-mail issues, and since e-mail issues are the worst political Kryptonite in the world, Trump feels there is no way anyone would kill Donald Trump in order to end up with a president who doesn’t want anyone reading his emails.

If the Secret Service were willing to talk to TotesRealNews, which they are not, they would most likely say that these are unsubstantiated rumors and Donald Trump has not fired his security team because even he is not that crazy, but it is also possible they would not say anything because they no longer have jobs because Donald Trump fired them. In a world where Donald Trump can be elected president, just about anything is possible.