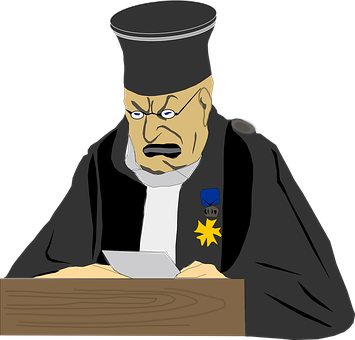 The Internet – Donald Trump, who is apparently still president, planned to announce his pick for the Supreme Court later today, but the word is out: he’s nominating himself.

Critics barely found the energy to pounce on such a bombshell, as they are exhausted from all the other dangerous ridiculousness coming from this administration, but those who managed to  find room for a little more outrage questioned the Constitutionality of the choice. Sean Spicer did not respond, because he was laid up at the hospital getting chewing gum removed from his digestive tract, but Kellyanne Conway stepped up to the plate, explaining that “It’s like Donald Trump’s taxes, people don’t care about that. They care about Donald Trump, they like him, and they want to see him doing as much as possible.”

Such a nomination may actually be allowed according to the Constitution, since the Ineligibility Clause only affects cases involving the Legislative Branch, and after a staffer whispered in Ms. Conway’s ear, she explained the probable legality of the choice in a rare factual statement of the non-alternative variety.

When questioned about whether Mr. Trump would have time to serve on the Supreme Court despite the time commitment required for being president, Ms. Conway explained that Mr. Trump will have plenty of time since “Steve is taking care of all the difficult aspects of the presidency, so time should not be an issue.” Then she glared at the press until anyone considering questioning Mr. Bannon’s level of influence opted not to ask such a question.

Despite the glaring, the press insisted upon asking more questions, with one reporter pointing out that even the ceremonial duties of the Head of State would require Mr. Trump to spend too much time away from Washington DC to possibly hear complicated cases, but Ms. Conway explained that Donald Trump would not have to be there because his judicial assistant would provide a brief summary of the issue at hand over the phone, and then the President/Supreme Court Justice would send his opinion to Chief Justice Roberts in a direct message on Twitter. Then, when a young reporter pointed out that John Roberts doesn’t really use Twitter, Ms. Conway countered that “He’d better start using it now if he knows what’s good for him.”

Another reporter said that Mr. Trump would likely be the most unqualified person ever appointed to the Supreme Court and therefore might have a tough time getting confirmed by the Senate. Ms. Conway replied by suggesting that this reporter should be jailed, or at least fired, for insulting the president, and that sitting Senators have nice careers at the moment and it would be a shame if something happened to those careers as a result of defying the administration.

After that, the reporters shuffled out of the room, dejected and terrified, just like much of the country. And many people felt that way before finding out about this nomination which, unless reality follows an alternative path to the one outlined in this article, is totally going to happen.

One thought on “Trump Will Nominate Self To Supreme Court”