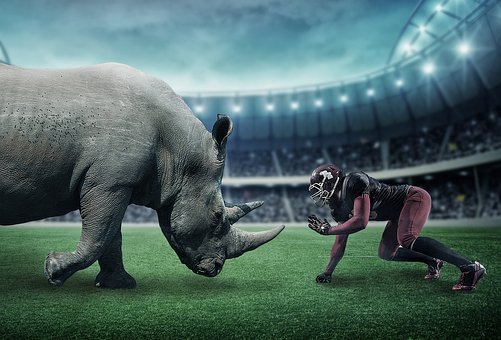 Both the Giants and Mets are not represented by the rhinoceros

Citing strong dissatisfaction with the direction of their teams, management for both the New York Giants and the New York Mets decided to make radical changes to their respective teams by taking each other’s players. Most of the Giants have little to no experience playing baseball at a high level, and the Mets have very little experience with NFL-caliber football, but the old strategy wasn’t working so they are trying something else.

The Mets, who not long ago had one of the best pitching staffs in baseball, are expected to have an abysmal starting rotation. Eli Manning is the best bet to notch a quality start, with about 50:1 odds to make it through six innings without giving up more than three runs. A fastball unlikely to crack 80 MPH and zero ability to throw breaking pitches won’t strike fear into the hearts of opposing teams, but he’ll find the strike zone much more often than he found the end zone, and if his teammates learn to play decent defense then he might be able to keep his ERA under 20.00. The rest of the rotation is unclear, although maybe Geno Smith will get a shot, and the guy who kicks the field goals might pitch because he has shown some sort of eye-limb coordination. And since none of them are expected to throw very hard, maybe they can each pitch every three games without getting too tired or injured.

As for offense, well, there is a lot of physical strength on the team. So with a bit of training, and a bit more training, and a good deal of luck regarding some of them having the innate talent which allows them to hit major league pitching once in a while, they should eventually start scoring runs. If the run-scoring comes at the same time as a strong pitching performance allowing less than ten runs in a game, these new New York Mets might win a game over the course of the season. Maybe even more than one.

Probably not more than ten. Definitely not more than fifty. This team is likely to be the worst Mets team in the history of the Mets, making 1962 look like 2015 or even 1986. For those readers who do not know what those years mean, the point is these new Mets are not the same as the old Mets because they will be much worse. But management decided that any change was better than sticking with what they had, so this is what they have now.

As for the new NY Giants, if they could clone Noah Syndergaard and have him play every position then this might be a playoff-caliber team. However, since this is reality and not The Land of Unrealistic Hypothetical Scenarios, they will have to make do with different players at each position. Syndergaard can be tight end, with the steady arm of Jacob DeGrom at quarterback. Cespedes can be running back until his hamstring breaks again, and then Tim Tebow can get a chance at that position. Tebow certainly isn’t going to play quarterback again. The wide receivers can be whoever, since they’re not going to be thrown to anyway. It’ll just be Degrom handing the ball off or throwing it to Syndergaard/the other team every play. Matt Harvey can be the kicker—that way he can protect his fragile arm and shoulder, and it’s not like they’ll be in field goal range very often. David Wright will do the same nothing as he usually does.

As for defense—it will be bad. Maybe the Giants will put some of the stronger players on both sides of the ball, but none of them will be especially good. Opposing offenses, even terrible ones, will cause major problems for this defense, and the drastic changes made to the team won’t make it better suited to tackle its problems. With the new defensive linemen giving up about 100 pounds to opposing offensive lines, the Giants’ enemies will be able to embarrass them thoroughly as long as these Giants have any pride left.

It could be tempting to switch the teams back again, but what’s done is done so there’s no way to turn back now. The only thing to do is give them a chance to disprove the haters and doubters, of which there are many. If they are still dysfunctional by 2020, then there will be an opportunity to fill roster spots with players who are qualified for the position.

At least, this will be possible if the Mets and Giants still exist when 2020 comes around.