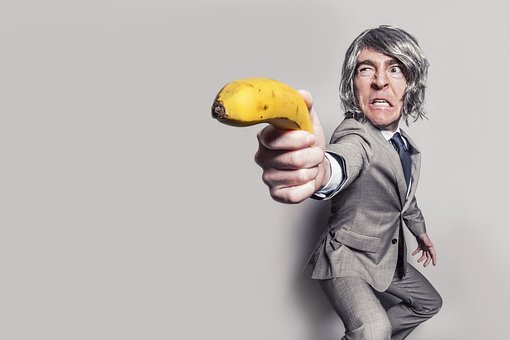 Not Wayne LaPierre. Unless bananas have unknown deadly qualities.

Changing one’s name usually requires spending a lot of time and cutting through a lot of red tape, but thanks to a bill which raced through Congress this morning and was signed by a president who was too distracted to read it, anyone who attempts to commit mass murder will have their name changed immediately. Not quickly, not within a day or two, but immediately. And their name will always be changed to Wayne LaPierre.

The reason for this instant name change is that most plans to kill a lot of people are inspired, at least in part, by a desire to become well-known. These people, if they can even be called that, have written in diaries and manifestos about wanting to kill as many people as possible so their names can be in the news and maybe even the history books, whether they survive or not. But now, these monsters cannot get that satisfaction, and neither can their ghosts, because from now on the news will report their crimes as being committed by Wayne LaPierre.

Just omitting their names is not enough, so all images of a mass shooter, either accused or convicted, will be pixelated fully to eliminate all possibility of recognition. There is no good reason for people to want to see pictures and videos of these killers or attempted killers, so the images will be treated as obscene and censored accordingly. Same for any audio footage involving a newly-named Wayne LaPierre.

The “real” Wayne LaPierre, however, will be Wayne LaPierre for the rest of his life, since at this point there is no way he can prove he has become a decent human being.

This new law is not being reported by any of the mainstream media because they are afraid of the NRA, but as Huzzah News does not expect to be noticed by the NRA, we have no such fear and can report freely on this news, which is about as true as everything else on this site.

4 thoughts on “All Mass Shooters to be Renamed Wayne LaPierre”