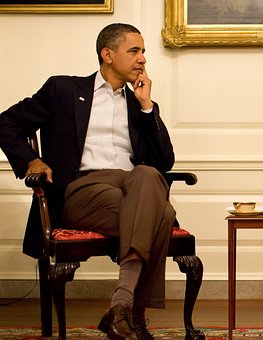 What is he thinking about?Hacking Trump’s robot brain, perhaps?

According to a source which cannot be named, Barack Obama is currently under suspicion of hacking Donald Trump’s brain in order to make the current president want to take away America’s guns.

Doubters of the world’s greatest news organization might find this preposterous, since many believe Donald Trump does not have a brain and a brain which does not exist cannot be hacked, but these naysayers are incorrect. Donald Trump does have a brain, and according to the aforementioned anonymous source it is a robot brain.

Mr. Trump allegedly was not always prone to dreaming of electric sheep, but this changed around fifty years ago when he briefly died of bone spurs. People, cruel people, mock this condition as a cop-out for cowards to avoid armed service, but it is an extremely serious ailment when someone has bone spurs in the way Donald Trump had bone spurs. The unnamed informant claims Mr. Trump’s bone spurs were the same shape and sharpness as the metal spurs used for riding horses, and while it took years for one of these spurs to fully penetrate one of his metatarsals, the same day that it did was a day when Donald Trump decided to hang upside down to prove that he could, causing the spur to fly through his leg bones, exit through his pelvis, fly through his rib cage, and land in his heart.

What happened next, according to the anonymous informant, was kept secret for years because the public was unlikely to be able to handle it. The public was not supposed to know how advanced robotics was, and it was not supposed to know that if a family was wealthy enough it could buy new mechanical organs to replace the human ones. But, according to words on the internet, it happened and Donald Trump was fitted with a mechanical heart which can handle a specific finite number of beats before expiring, and a robotic brain which was designed to be as much like Donald Trump’s original brain as possible so the body wouldn’t classify it as a foreign object and therefore refuse to tolerate it.

Although the procedure appeared to be a resounding success at first, the program was discontinued when observers could see what became of their test subject, but they still allowed him to continue existing. His robot heart keeps beating, using a self-cleaning mechanism to protect the body from one of the deadliest dangers associated with frequent fast food consumption. And his robot brain keeps doing what it does, being less capable of empathy than his previous brain was, but much more prone to being hacked.

Because of the vulnerability of computerized brains, Obama was able to hack into it, with the help of the FBI and George Soros and the Illuminazi Party, in order to change Mr. Trump’s stance on gun control and possibly take away America’s guns.

Either that, or the story about Trump being a robot is a bunch of nonsense and the gun lobby is so far out of control that even Donald Trump sees the need to rein them in at least a little bit.