If you’re not ready for the holiday season, it’s time to get ready because the most holiday-filled holiday attraction in the history of holiday commercialization is about to open. It will use what used to be a large barn on a farm which had to close due to trade wars, and it will have the appearance of a nativity scene manger, complete with lots of hay and animatronic Baby Jesus and Mary & Joseph and the Three Wise Men.

There are also dozens of robotic talking turkeys walking around and haunting the place.

While the Haunted Manger doesn’t open until October 1st, Heck Yes News was able to take a tour and listen to some of the things the turkey ghosts were saying. Here are a couple of highlights:

The Ghost Turkey Manger opens October 1st in the place where it is. Heck Yes News would say where that is, but that is too much like an ad. A sponsored post. Which this is not. Their manager could have said something like “We have a couple of hundred dollars we could use for advertising. Please do us a favor and tell people where we are when you write about us.” That would have made it crystal clear that they wanted to make a deal, but they didn’t do that. Maybe you can work something out with Google to get this information.

Probably not, though. Any matching results will be purely coincidental. 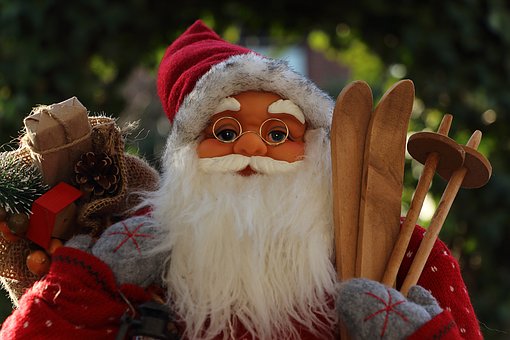 Santa, before he got angry

The Internet – Santa Claus has a reputation as a jolly, happy-go-lucky person, but as a group of enthusiastic singers learned yesterday afternoon, when Christmas draws near Santa gets serious. And if you bother him, you will get arrested.

Mr. Kringle made an effort to honor the Christmas spirit by not taking anyone to court, but in this case being good turned out to be a bad idea. Nicely telling the gathered vocalists to get off of his lane was met with no response, probably because the foolish mortals were singing so loudly they could not hear any words spoken at a civil volume.

Santa Claus would not talk to TotesRealNews, as he was busy, and also because he lost his voice screaming at his deranged fans. According to one such fan, Santa yelled:

“I’m not going to deliver gifts right now, you nincompoops! It’s December fifteenth! Just because your radio stations down south, where you should be, think it’s Christmas already doesn’t mean it is! I mean, are you people serious? You have to realize with millions and millions of kids to deliver to, I have to have a bunch of factories and not just a quaint little workshop, right? Maybe I’m closer to magical than you are, but I still have to follow at least some of the laws of physics, especially when they’re not being temporarily suspended for Christmas Eve, which right now is definitely not! It’s stressful enough seeing suffering in the world which I can’t do anything about; I don’t need distractions keeping me from doing what I can help with!

“But since you’ve already distracted me, I need to yell at you more so my blood pressure doesn’t reach dangerous levels even for an immortal such as myself. Of course I was riding down Santa Claus Lane! It’s where I live! That’s why it’s named after me! If I were riding down Broadway today that would be noteworthy, but not worth singing a happy song about because it would mean I quit Santa-ing and nobody’s getting any presents unless the kids’ parents buy them, which as we all know isn’t going to happen! Which is why I need to get down Santa Claus Lane, without all of you in my way, and do my job!”

After the tirade, the North Pole Police were at high alert, and they arrested the singers for trespassing. Then the “Here Comes Santa Claus” singers went to SantaCourt, where Kangaroo the Elf declared them all guilty and sentenced them to the same punishment meted out to all trespassers: deportation via the SantaBoat. But this would have to wait until after Christmas, since everyone at the North Pole was busy.

At least everyone was busy except for the singers, who apparently had nothing better to do than go to Santa Claus Lane and sing about it in the middle of December.