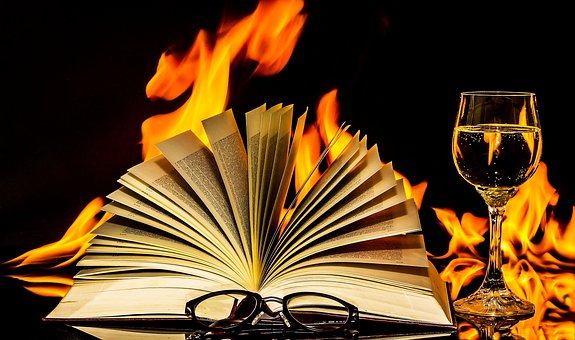 Some might find the new book by Amanda Sexwords too hot to handle.

Magic Mark the Neck Romancer, who is also a necromancer even though he doesn’t put that on his LinkedIn profile, had been forcibly removed from his spacious Gothic castle at the end of the previous novel, Neck Romancer 2: Buttresses and Butterfly Kisses. The authorities were not pleased with his often successful attempts to turn his female visitors into vampire soldiers despite not being a vampire himself, and all the other good Gothic castles were taken, so Magic Mark relocated to a not-at-all-suspicious cabin in the woods.

The Transmogrifier, which has the same name as a similar apparatus in the Calvin & Hobbes comic strips for purely coincidental reasons, turns woodland creatures into intelligent yet fully obedient super-soldiers. These soldiers, if enough of them can be created, will allow Magic Mark to take over the world and enact revenge upon the people who bullied him during high school.

Magic Mark’s steamy encounters in the woods, which are worthwhile in their own right, seem to be slowly bringing him closer to his ultimate goal. But in literature as in life, things which seem simple rarely are simple. This becomes apparent when he falls in love with one of the hikers, someone who isn’t a fan of his nefarious plans.

When Magic Mark falls in love for the first time since the previous book, will he give up plotting once and for all and settle down? Will he perform telekinetic surgery on his own brain so he is no longer capable of love? Will he perform the Macarena nonstop until she gives up and leaves? Will he do something even more villainous? Or something totally different from the previous four questions?

To find out, you will have to read this totally real, not-remotely-fabricated novel by the real author Amanda Love Sexwords.