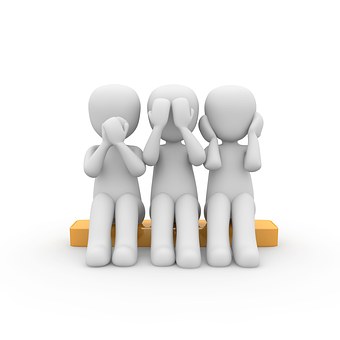 These figures will be used in demonstrations of how to ignore pornography when in school. Only the one in the middle is doing it the right way.

As a follow-up to their declaration of pornography as a public health risk, Florida’s lawmakers have been hard at work trying to figure out how to protect the state’s children in case a school is attacked with pornography.

The training will involve anti-porn activists coming into schools, much like anti-drug activists visited classrooms during the DARE program. These activists will employ arguments such as “you might go blind” and “you might get pregnant” to convince students not to look at pornography. If a porn-wielding maniac enters the school and attempts to cause problems, other students will be taught to look away. If they have to close their eyes while walking and they crash into a wall or worse, that is a small health risk compared to the danger of laying eyes on pornography.

Finally, since this is Florida, as a last resort it may be permissible to shoot a “porn-carrying sicko.” Anything to protect the innocent eyes of these poor schoolchildren who would never be exposed to any obscene images if not for school pornings.