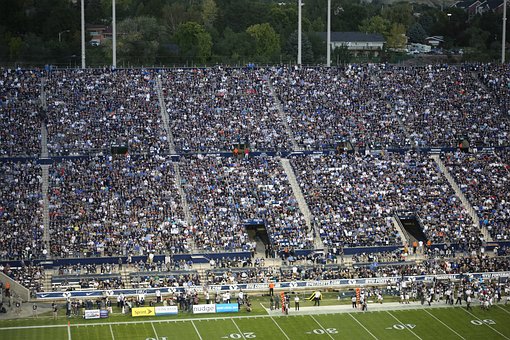 A different stadium, which is also too small

The Internet – While Tom Brady seemed almost destined to get a fifth Super Bowl ring this year, now he will not get a chance to do so because NRG Stadium in Houston isn’t nearly big enough to hold the millions of people who plan to watch the game.

The place where the Super Bowl was supposed to happen is a decent-sized sports venue, with a seating capacity of approximately seventy-two thousand, which is generally enough to accommodate football fans who are able to buy tickets early or willing and able to pay exorbitant scalper prices. However, previous Super Bowls took place in a world where in-person attendance was not the same thing as watching the game on TV. Now we live in a post-inauguration reality, and despite shifting perceptions regarding the nature of truth there is absolutely no way to fit millions of human beings in a NFL stadium.

Not even an alternative way. Can’t happen. Don’t even try. Even if it’s not the full 100+ million who will be in the stands, but somewhere around fifty million, they will not fit. What are you going to do, stack thousands of people on every seat? Super Bowl attendees aren’t exactly pillars of strength. And even if you did manage to pile everyone on top of each other, many of them won’t be able to see the action without turning their bodies, which could cause life-threatening pile-ups in the stands that might spill out into the field, putting players at greater risk of injury than usual.

NRG Stadium also doesn’t want to risk the sort of damage to the field which could result from millions of people falling on it at the same time. And it could be millions, because if an upper-level pile goes down, they’re taking much of the stadium with them, because that’s how the domino effect works. Except these aren’t dominoes, these are people, and most likely far too many people for all the hospitals in Houston to be able to treat.

Too many people, if these people are lucky. Unless the reality of injury changes as drastically as the reality of statistics, most Super Bowl attendees will be dead of internal bleeding or asphyxiation or crushed organs before medical professionals can remove them from the piles. Even more tragically, odds are many of these victims will be prominent celebrities who had seats to themselves before the multitudes came from above. And while Tom Brady’s offensive line can keep him upright for most of the game, they will not be able to protect him from millions of tumbling humans, and the NFL is not confident it will be able to recover from such a catastrophe.

So the Super Bowl is cancelled, and will remain cancelled until there is a difference between being there in person and watching something on television. For those who are upset by this development, there are legal methods of protesting those responsible, at least until the reality of democracy no longer has anything in common with the reality of the United States of America. And if you are someone who dislikes the Super Bowl and is glad that it has been cancelled, you can thank Sean Spicer by sending him Dippin’ Dots, which are totally his favorite snack.