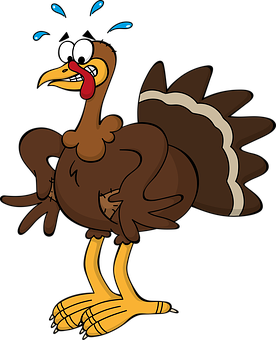 He is worried Donald Trump might eat him, but also thankful to remain uneaten by the president-elect.

The Internet – This year has been a rough year for many Americans, with the deaths of many beloved human celebrities and one gorilla, as well as an election season which didn’t go the way most people hoped. In spite of tragedy and disappointment, America is coming together this Thanksgiving to figure out something to be thankful for, and that something is that Donald Trump has not eaten all of America’s turkeys.

Mr. Trump, who weighs 198 pounds according to medical records which may have been accurate years ago, is known for his ravenous appetites. He has gained a reputation throughout the years for his seemingly insatiable desire for glutton-magnets such as money, sex, fast food, and being talked about for any reason at all. His appetite for turkeys is less well-documented, to the point it has never been talked about at all, but like Mr. Trump’s detailed plans for actually making America great again, just because it has never been observed doesn’t guarantee that it doesn’t exist.

And now that he has been elected president with about 2 million fewer votes than the second-place finisher, Donald Trump’s potential turkey-guzzling could have come to fruition. He could have gone to his favorite tweeting website promising favorable treatment to farmers who gave Mr. Trump all their turkeys, and unfavorable treatment to those who didn’t, and if turkey farmers believed him like millions of voters believed his campaign promises, he could have had all of the turkeys.

And then, with a stomach which is believed to love turkey like his transition team loves highly unqualified right-wing extremists, he could have eaten all of the turkeys.

He may still eat a lot of turkeys. Thanksgiving hasn’t started yet, and much which is unexpected can happen in the late hours of a weeknight. But since he has yet to even tweet about wanting to eat an obscene amount of turkeys tomorrow, and most people have bought their turkeys by now, unless he comes after turkeys like Obama was expected to go after guns, most Americans who are not suffering from abject poverty will get to eat turkey on Thanksgiving.

We may not have David Bowie, or Prince, or a president who seems to have much of an idea what a president is supposed to do, or decent treatment of those protesting an oil pipeline going through Sioux territory, but at least not all of our turkeys have been eaten by Donald Trump. And for that, everyone who has thought about such a possibility is thankful. Between sobs and sensations of helpless terror, America is thankful.