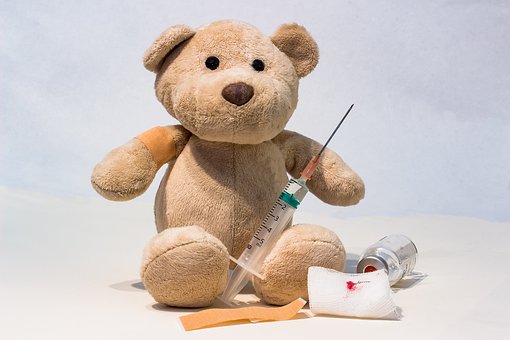 Some people can’t bear the idea of children getting vaccinated

The Internet – Forty-two people attended a gathering celebrating the Trump Administration’s willingness to question the validity of vaccines, and thirty-nine of them are now dead. The official cause of death in every instance was methyl alcohol poisoning, although failure to understand science was also very much to blame.

The disease prevention opponents, who are vehemently opposed to the inclusion of thimerosal in vaccines because they are apparently unaware of the difference between ethylmercury and methylmercury, decided to throw a house party in honor of the new government’s acceptance of pseudoscience, but they ran into budgetary issues. While many vaccine opponents are quite wealthy, others aren’t, and this unfortunate group fell into the latter category, so buying common alcoholic beverages was prohibitively expensive.

What is not expensive, however, is a gallon of methanol when it is available on Amazon for eight dollars. And, much like they were unaware that ethylmercury is expelled from the human body fairly quickly while methylmercury is not and tends to cause dangerous toxicity through accumulation, most party attendees were unaware of the difference between ethanol and methanol. If all mercury is the same, then through the same logic all alcohol is the same. However, as the three non-drinking survivors soon found out first-hand, a few ounces of ethanol makes you drunk, while a few ounces of methanol makes you dead.

If this story is to be believed, which it should be because it is on the internet, what happened at that party was terribly tragic since those thirty-nine methanol drinkers are just as dead as the hundreds of millions of people who died from smallpox in the 20th century, people who died because vaccines hadn’t wiped out the disease yet.

The Internet – According to recent discoveries in the medical science field, the cause behind various gaffes in the Republican National Convention was not pure laziness or incompetence. It turns out many of those involved with the convention, including invited guests, speech writers, and music planners, are afflicted by a highly specific allergy in which any attempt by the brain to conduct research or fact-checking triggers an immune response which attacks the relevant cerebral area, thus shutting down the thought process and preventing successful research. There could be hope for these sufferers, however, due to the extremely recent development of allergy shots addressing this specific problem, but people with research allergies would have to consent to the shots.

So far, nobody who is allergic to research has consented to the shots.

The most common reason cited for this refusal by these people who refuse to cite anything is how well they are currently paid to not do any research. Their various benefactors, which are primarily politically conservative lobby groups, donate generously to their political careers in exchange for blind support of the lobby’s cause. If the research allergy was cured, there could be a possibility of increased understanding leading to switching positions from the approved one to a less profitable one, and the people questioned didn’t want to know how terrible that could be.

Others expressed a reluctance to be able to research because of an unwillingness to be anything like Hillary Clinton. Clinton, they said, seemed like the sort of person who would do a lot of research before she decided anything, although they couldn’t be sure because their allergies would not allow them to have fact-based certainty regarding anything. But still, they had strong faith that Hillary Clinton does a lot of research, and an even stronger belief they didn’t want to be anything like her, so they chose to take a pass on treatment.

Others did not want the shots because they oppose anything resembling vaccinations. Some were afraid the shots would give them autism, others feared autism being passed on to their future children, and still others were afraid that using a needle to cure a research allergy would give autism to their already-born children. Unsurprisingly, none were interested in hearing why their fears were unfounded.

As research allergies are not physically contagious, those who don’t want shots, which includes all of those with the allergies, do not have to get shots. However, elected officials with research allergies could be in danger of losing re-election bids due to their stubborn ignorance, but only if the majority of the electorate does not share these allergies.